Oh, yeah. Before I was gone for a week and staying with my niece's babies, I was telling you our team had just crossed the finish line. We had an awesome moment when Rik staged an impromptu medal ceremony and we just enjoyed the moment. Then reality set in and we had to clean up the vans and get our shit out. Somehow in the chaos of 38 hours, after using my iPod armpocket for the 1st leg and setting it aside to dry, it got misplaced. I hear it has been found in the box of Spark People t-shirts and is on its way to me. I hope so, since I only got to use the dang thing once!

Since the finish line was right at our hotel, I decided I wanted to drop my bags off at our room, and actually SEE the hotel. I really wanted a cold non-alcoholic beverage and figured we could hit the vending machine. That didn't happen. I also thought that I would just drop my crap off and meet up with my team mates to celebrate our finish. That didn't happen either. Charlie and I got to the room, I laid my bags on the floor and we laid across the bed, heads resting on our hands, while I tried to convey anecdotes from the last day and a half. I felt like I was just rambling on and on, my eyelids getting heavier and heavier. I started talking with my eyes closed. All of a sudden I open my eyes and Charlie is staring at me. "Did I just fall asleep mid-sentence?!?" While laughing at me, Charlie confirmed I was that exhausted that I indeed fell asleep while speaking. So, I decided I just needed to call it a night. I peeled my clothes off, slid into the luxurious bedding and, I believe, fell into a coma.


I have NEVER slept that soundly. On a good night, I wake up at least ONCE to go to the bathroom. I also toss and turn, propping up the four pillows around me, creating a nest like a gorilla, to get comfortable. The next time I looked at the clock it was 5:40 am. I slept from 10 pm until nearly 6 am without waking up or so much as turning a pillow. I guess I couldn't possibly pee seeing as we were all dehydrated from the relay.

Since we were up early and not meeting our teammates until 10 am for brunch, we had some time to ourselves to explore a little and get some coffee. Right across the street from the hotel was Ana's Cuban Cafe and we got some great Cuban coffee, sat out on the porch and people watched. I got a surprising view of an older man riding past on his bicycle with white MESH shorts on. Of course he didn't have any undies on! Thankfully I only saw him going, not coming! We did some souvenir shopping and I picked up a beautiful mug for myself so that every morning, while I'm drinking my coffee, I'll think of my new friends and the great times we had on this trip.

We lazed around on a hammock, enjoying the warm sun, just like we did 17+ years ago on the beaches of Maui. It's nice to know, all these years later, we still really enjoy each other's company and can have fun doing just about anything.

While walking around the area, we saw tons of vans from the relay. Some people had already started washing off their decorations, while others were still sleeping off the celebrating they did the night before. There were some interesting decorations and some seriously funny team names.

It was finally time to meet everyone for brunch and we wound up at the Six Toed Cat and enjoyed every one's company. Unfortunately, Jen, Carly, Jen and Ada had to leave right after breakfast, so the sad goodbyes began.

After a long, leisurely meal, Charlie and I had to figure out how the hell we were getting from Key West to Miami the next day, so we went back to our hotel to iron it all out. This is the first time I can remember staying at a hotel with a concierge. Suzie at The Southernmost Hotel was extremely helpful. She kept reminding me that it was her job to help, but it still was really appreciated! Anyway, she gave us the phone numbers for the Key West shuttle and some car rental companies. The shuttle was booked for the following SIX days!! That left having to rent a car and make the 4 hour drive ourselves. I called 3 companies and they had not one vehicle. Finally, Avis had vehicles, but would you believe all they had left was 12 passenger vans?!? We had no choice but to rent one. Charlie didn't really want to drive, but it was our only option. So, we had to get a cab to the Key West airport (if you can call it that!) to pick up the van. The funny thing was that I was able to decorate it with my before/after magnet for the drive to Miami! 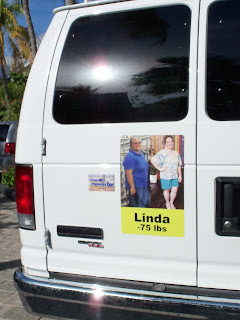 By the time we got back, it was time to head to Rick's Bar for the Ragnar award ceremony. No awards for our team. If there was a "Most Inspirational" team, we would've had that one in the bag, I think. We hung out and met other amazing teams there, as well. "The Tightans" was an ultra team from D.C. that won their category, and that was after having 3 of their 6 team members drop out 3 weeks before the race. They scrambled and managed to fill the empty slots in time. How do you find someone (let alone 3 people) willing to run 1/6th of a 200 mile relay on the fly? I'd say www.nutjob.com!

Charlie and I split off again and went over to Mallory Square since it was just a few blocks away. Unfortunately by the time we got there, after enjoying some conch fritters and a delicious Key Lime martini, it was too late to watch the sunset at the top of the Shipwreck Museum. We did have a chocolate dipped piece of Key Lime pie from Kermit's and on the walk back came across Mattheessen's and got the best, biggest chocolate chip cookie EVER!!


We also stopped into the famous Captain Tony's Saloon. People leave their business cards stapled to the walls and ceilings, so we left one of Charlie's.


I wasn't willing to part with MY bra. We were still meeting everyone for one last drink at Bourbon St., so I didn't want to show up with my ta-tas hanging low. At the bar, we talked some more, took plenty of pictures and said our goodbyes. John and Meredith were leaving the next day as well. Rik, Katie, Lealah, Allison and Andrea were staying another day or two, the lucky ducks. From the pictures I've seen they had some really great times and I'm a bit jealous I wasn't able to stay and bond some more. I surely learned that coming in the day before and leaving the day after is NOT enough time to spend with all of these great people AND see the city. I will plan accordingly next time.

Charlie and I went back to the hotel and had one last beer by the pool and talked for a good long time. Had we known we weren't going to be tired, we would've stayed at the bar a little longer.


We finally got our asses up and back to the room to finish packing and get to bed. We had to start the day out at 4:30 am to get on the road for Miami. An 11:55 am flight to D.C. was waiting for us to bring us down on LI at 4:40 pm. It was an extremely long travel day and oh so depressing. The warmth and sunshine of Key West was quickly replaced by the gloomy steel gray sky and 30* temperatures. Snap! Back to reality...

Oh, yeah, even after feeling like death after my first leg, vowing I would never do a RR again, thinking I possibly wouldn't recover to finish the other 2 legs, we're all on board for another crazy ride, this time through Tennessee! November 2014 can't some soon enough.
Posted by Frickin' Fabulous at 40 at 4:50 PM