So it was absolutely perfect timing that in my Facebook feed this morning, Women's Running magazine posted a link to an article about Mental Tricks For Long Runs. Thinking about running 16 miles gives me the excited "butterflies in your stomach" feeling, but it also scares the bejeezus out of me at the same time. In the article, the author breaks her long runs up into manageable distances. She took her 20 mile training run and divided it up into four 5-mile runs. You only concern yourself with the section of the run you are in. You do not think about the one you ran, nor the runs you still have left to do.

A 16 miler becomes four "easy peasy" 4-mile runs. After reading the post, I plotted our course. It's basically the half marathon course we've been doing. I am still hoping for those ocean breezes to make the run more pleasant. We will park in the same spot, run a 4 mile loop south, out over the bridge, around the beach and back to the car. From there, we will run 4 miles north to the Dunkin Donuts (using it only as a mile marker hopefully), zig zagging a bit through one development. The third 4 mile leg will be the reverse of the second, back to the car to refuel, and finally repeat the first leg out and around the beach for our final four miles.

When you take such a daunting task and nibble at it in human bites, it no longer seems that scary. I mean, I can't eat an entire layer cake in one bite, but if I take a forkful at a time, it will eventually make its way to my stomach, right? ;)

I truly am hoping this technique will do the trick. Why did it take so long to think of it this way, though? How do you get through long-ass runs?
Posted by Frickin' Fabulous at 40 at 3:09 PM No comments:

I am sure with that new fangled common core math I can make that equation work out, but when it comes to long runs, it ain't happening. I have a bad tooth. I have ignored it. And it's my own damn fault. Just another result of my old bad habits of eating sugary crappy food late into the night without taking care of my teeth. Last night this toothache was a pain like no other.

I took two extra strength Tylenol at 9 pm, just before bed. I was up at 1:30 am and just could not shake the pain. I wound up propping up all my pillows to try and sleep upright. I ran through 'The Four Seasons' three times on the DVD player. I held an ice pack to my jaw. I didn't want to take more meds or something stronger because I want them to work when I really need them. DUH. That time was LAST NIGHT!

When the alarm went off at 6 am all I could think was "F*CK THAT!" I went downstairs and informed my husband of the night I had (We mostly sleep separately. Don't worry. It works for us since Charlie worked nights for the first 10 years we were married and I just need the WHOLE bed.). I managed to prop myself up on the couch and sleep. I slept TWO whole hours. The pain goes away during the day and when I am upright. Doesn't make sense, right? I am completely pain free right now, and I haven't had a pill since 11 am. Things that make you go "hmmmmm".

So I suggested we run at the gym, side by side, on treadmills. I honestly didn't have any intentions of doing 16 on a treadmill. Can't imagine that at my gym. The TVs are preset on certain channels and there is no playlist long enough or fun enough to keep me going that long. After my great run on Friday I decided I would top that. I set the walk interval speed at 3.7 mph, set the run interval speed at 5.2 mph (a tenth of a mile slower than the last run) and after a 5 minute warm up at 3.0 mph (cool down was the same) I had at it. I did a one minute walk at 3.7 mph, a 35 minute run, two minute walk, 15 minute run, two minute walk and a 9 minute run to finish 5.5 miles in 1:04:42!! I only walked 5 minutes in a 65 minute run. That's an 11:46 pace!! I know my last run was at an 11:36 pace, but that run was two miles shorter. I'm gonna kill the first five miles of the marathon! And then it will kill me! 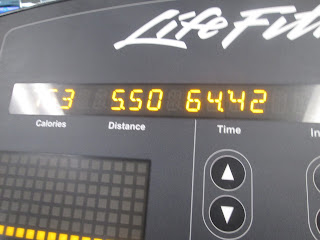 It's Saturday afternoon, which means I am about 14 hours away from my long run for the week. Tomorrow's distance? 16 miles. I am both excited to take on the task and worried about all the things that could happen simultaneously. The last two weeks of runs have been pretty good, in my opinion. My last longish run wound up being the last training run for the Suffolk County Marathon on the 13th. It was supposed to be two 5 mile loops in the town of Babylon, along the bay, but for some reason it was changed to the 10k trail course of Southard Pond Park. Charlie switched his late night so he could run with me and our friends Laurie and Kim. It was a tough course, lots of gravel and horse manure to maneuver around. We managed to do 7.45 miles in 1:46:53. The best part was the BOGO drinks after the run at Mary Carroll's.  I'm not a drinker, but that Angry Orchard hard cider was one of the best I have tasted!!

That's a major improvement for me and something I need to transfer to the streets when we are out on our long runs. Of course there is a difference between treadmill and outdoor running AND sustaining a pace for 5 miles versus 15, but I feel if I can improve those initial 5 miles, miles 15 and 16 won't seem so bad. If I can continue to push myself on my weekday runs, then eventually the first 10 miles will be stronger, and the marathon possibly won't drag on forever! The reason I am most concerned about this is that damn 4:30 course limit on the 18 mile marathon tune up run we have coming up on September 20th. With that being said, my 16 miler needs to be done under 4:00!!
Posted by Frickin' Fabulous at 40 at 5:57 PM No comments:

Sunday was a great day for a long run, even with the sun blaring down on us. I decided Charlie and I would run the Hope Runs Here Half course and then add a bit more to hit my 14 mile mark. We parked at my niece's house, which is on the course, and headed out to William Floyd Parkway from there. Thankfully my Garmin found a satellite rather quickly and our warm-up walk was included in our total distance. 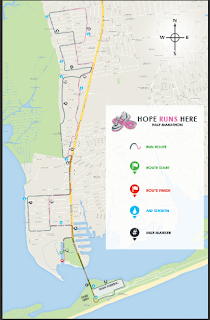 At 7:45 am we got going, starting at about the bottom left of that rectangle, under mile marker 4. We then went up that block and headed south towards the beach and over the bridge. The ocean breezes were absolutely mahvelous and exactly the opposite of what the conditions were on that half day! I just ran as far as I could and then would walk a bit. I wasn't using my Gymboss with the 2:1 interval. Charlie said he thinks I am running further without it since all I seem to do is anticipate the beeps of the timer to start and stop. It made the run more enjoyable without all that noise!

The incline of the bridge seemed like nothing compared to the hills we've been running on in Selden. We were able to run up it both going into and out of the beach. We ran passed the TWA Flight 800 International Memorial and out along the perimeter of the parking lot. We continued out, back over the bridge, up WFP and made our left, heading back past the car (I should have stocked it with cold drinks!!), along Grandview and the beautiful Great South Bay. Once we were back on the highway we made another left turn into the neighborhood just south of mine.

Unfortunately, the street we turned onto borders the Wertheim Wildlife Refuge and the biting bugs were out in full force, just like the first time we attempted a 14 miler! We got away from that area as quickly as we could and headed into the Smith Point Estates, where the streets are nice and wide and lined with gorgeous homes to ooh and aah over. The best part about a nice neighborhood like that? SPRINKLER SYSTEMS!!! We ran through them as often as possible.

I had an idea of what our mileage was from knowing the course, so I did not look at my watch AT ALL. It was hard for me, but I wanted to be far enough along on the run to know I *would* get it done. We wound up burning through our beverages pretty quickly so we decided to make a pit stop at Dunkin Donuts and get that really refreshing unsweetened iced tea lemonade. We were only about a mile from the house at this point, and my plan was to run up to the house for more fluids, but I know me. It might have taken too much effort to leave the front door again. We filled up our bottles and I dumped some ice in my sports bra. HIGHLY SUGGESTED! And my watch was at nearly 8 miles at that point, in under 1:50, with the stop.

So back on the road, heading south on WFP and we decided to veer off the half course and start zig zagging up and down the blocks in order to rack up the miles. I slowed down some. The next 4 miles were done in a bit over an hour. My goal was to get the 14 miles done in the same time it took us to do the half marathon, which was 3:25:17. We hit mile 12 at 2:57 and my left calf started cramping, we were out of fluids, again, and it was now almost 11 am, full sun in effect. So we stopped at 7-11 and I got a Vitamin Water and we walked the last two miles, slowly. We got to the car at about mile 13 and just kept walking up and down the block, passing it four times. 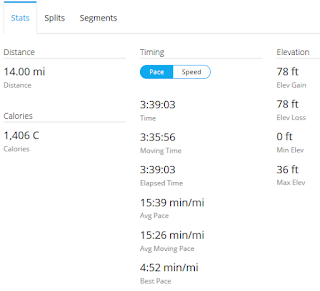 I need to work on both my endurance for the runs and my walking speed to hold a 15:00 mile and under for the TCS NYC Marathon 18 Tune-Up run on September 20th, which has a 4:30 course limit. It will hopefully be cooler but because it's in Central Park, it will be 3 hilly 6 mile loops. I am concerned but we'll be back to the hills course on Sunday for more hill training. I am going to attempt to get there once a week until that race and at least every other week until the marathon.

For now I am celebrating the fact that I made it through that mental blockade of going past the half marathon distance. I may possibly have more road blocks on future runs, but I need to remind myself of how far I have come since my knee injury and who I am doing this for- both myself and the EJ Autism Foundation. 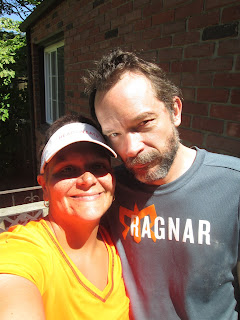