I can NOT believe we are a mere 14 days until the big event! I am trying to keep my nerves in check and focus more on how exciting the entire marathon weekend will be. We've done a few long runs since my last post. The most memorable ones are the 18 mile marathon tune-up run on September 20th and last Sunday's 20 mile celebratory long run.

On September 20th we were up at 2 am to prepare for the journey into Manhattan. We took the 3:45 am train from Ronkonkoma to Penn Station. From Penn we took a cab up to race day registration, which was on the east side of Central Park, all the way up at 102nd Street and 5th Avenue. We managed to arrive before the NYRR volunteers were ready for us! So we waited a little while, got our bibs and t-shirts then headed to baggage drop-off, which wasn't ready for us, either. I was already prepared by having our clothes and such in clear race bags so I could just slip them out of our backpacks for inspection. After that line we headed to our 'H' corral (which was the last corral) and waited some more (on huge rock formations) for the 7:00 am start.


The run consisted of 3 6-mile loops of Central Park. The first loop went phenomenally. The goal was to stay under a 15:00 mile, since the course cut-off was 4 hours and 30 minutes. I was a full 15 minutes ahead of that pace after the first loop. And then the rolling hills of Harlem and the park in general were getting to me. I started walking a heck of a lot more. Charlie was fully aware of our pace since there were pace clocks at each mile and he was concerned we would slow down too early and not make the cut-off. I started to really bonk at only mile 7. Getting through that second loop was nothing short of a miracle. Passing the finish chute in order to go out for the third and final loop was a major test of will!

The last loop had to be 12 miles. It seriously felt like it! I made sure to run every downhill there was, but I walked a ton and in mile 16 or 17 not only did my left calf start to seize but that hammie started crying out for mercy as well! I never experienced that before! I even stopped and rubbed them both a bit, but I knew if I stopped moving too long, every other part of my body was going to throw in the towel as well. So we pushed on. The "Make Cat Hill your bitch" sign was the funniest thing about the entire course. And we finished. 4:22:08. 8 minutes to spare and it brought us both to tears.

We had a 2:00 pm reservation at Tavern On The Green for brunch to celebrate our 20th wedding anniversary, and by the time we finished running and got our backpacks and wits about us it was about noon. That meant we had 2 full hours to change clothes and make our way to the west side of the park. We passed the restaurant THREE times on the course and would you believe we could not make our way over there? As lovely as the park is, there is no walking path that just cuts across directly from east to west. So we meandered our way around for a full hour and a half until we just broke down and asked a kind nanny for directions. Our sight-seeing helped kill all that extra time and worked up the appetite I always lose after a long run!

So, when we were within sight of the restaurant we stopped and changed in the restrooms at Le Pain Quotidien, a little bakery in the park. (I pissed some ladies off for taking too long as one of them made an announcement that "there was a long line.") I surprised Charlie by wearing a new little Vera Wang dress and cute slide sandals I found on clearance at Kohl's. It's a surprise because I rarely wear dresses and Charlie likes me in them. This one was incredibly comfy with pockets and I felt nice in it. We were dressed in our "smart casual" wear as per the restaurant's dress code and for a celebratory dinner of our truly blessed 20 years together. 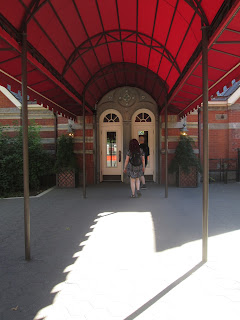 Tavern On The Green was just beautiful. I requested we sit in the Central Park room which had beautiful cream colored furniture and a glass wall with a view of the al fresco dining right on the park. It was a gorgeous day and the room was filled with sunshine and romance.


We started our meal off with a great apple ale:


For brunch we split two entrees, the Tavern Burger and the "chicken" and waffles, which was duck confit instead of fried chicken. Perfection!!! I couldn't believe how ravenous I was after that run, but every bite was amazing. To finish off the dining experience... 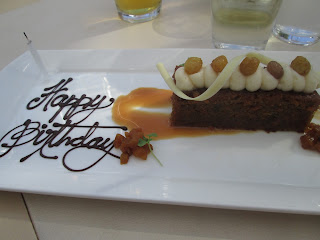 ...cake to celebrate my love's 49th birthday. Every aspect of the restaurant was just impeccable and worth every penny. Maybe it was the fact that we had just covered 20+ miles (remember, we got "lost") and that's why the food tasted so damn good? Maybe it was celebrating our love enduring 20 years of life's ups and downs that made the ambiance so romantic? I don't really care. That afternoon will go down as one of our top ten days of our lives.

But the fun and celebrating didn't end there! We had one night booked at the La Quinta downtown near Penn Station. The Tavern doorman walked a block over to Central Park West to hail us a cab so we wouldn't have to walk another step on our already sore legs. Such service!! The room was probably the smallest we've stayed in but the hotel has recently been renovated and it was beautiful. It had everything we needed. ;)


A great feature of this hotel was its location. It was a short walk to a sweet Irish pub called Foley's with a literal ton of baseball and sports memorabilia. AND it had a phenomenal view of the Empire State Building from the rooftop bar!


We slept like logs that night. I really need one of those 'thermapedic' fancy mattresses!! The next morning we had the complimentary breakfast in the hotel then walked around Koreatown and window shopped. I didn't get Charlie to try kimchi. We should have had the kimchi dumplings instead of the chicken fingers in the pub! Oh well. Next time.